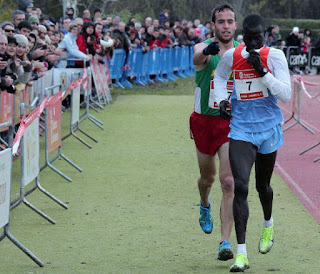 On December 2, Basque athlete Iván Fernández Anaya was competing in a cross-country race in Burlada, Navarre. He was running second, some distance behind race leader Abel Mutai - bronze medalist in the 3,000-meter steeplechase at the London Olympics. As they entered the finishing straight, he saw the Kenyan runner - the certain winner of the race - mistakenly pull up about 10 meters before the finish, thinking he had already crossed the line.

Fernández Anaya quickly caught up with him, but instead of exploiting Mutai's mistake to speed past and claim an unlikely victory, he stayed behind and, using gestures, guided the Kenyan to the line and let him cross first.

Ivan Fernandez Anaya, 24, who is considered an athlete with a big future (champion of Spain of 5,000 meters in promise category two years ago), said after the test:
"But even if they had told me that winning would have earned me a place in the Spanish team for the European championships, I wouldn't have done it either. I also think that I have earned more of a name having done what I did than if I had won. And that is very important, because today, with the way things are in all circles, in soccer, in society, in politics, where it seems anything goes, a gesture of honesty goes down well."

A few years ago at the Seattle Special Olympics, nine contestants, all physically or mentally disabled, assembled at the starting line for the 100 metre dash.
At the gun, they all started out, not exactly in a dash, but with a relish to run the race to the finish and win. All, that is, except one little boy who stumbled on the asphalt, tumbled over and began to cry. They slowed down and looked back. Then they all turned round and went back - every one of them. One girl with Down’s syndrome bent down and kissed him and said, ‘This will make it better’.
Then all nine linked arms and walked together to the finish line. Everyone in the stadium stood and cheered. The cheering went on for several minutes.

One day, when a seamstress was sewing while sitting close to a river, her thimble fell into the river. When she cried out, the Lord appeared and asked, "My dear child, why are you crying?" The seamstress replied that her thimble had fallen into the water and that she needed it to help her husband in making a living for their family.
The Lord dipped His hand into the water and pulled up a golden thimble set with rubies.
"Is this your thimble?" the Lord asked The seamstress replied, "No."
The Lord again dipped into the river. He held out a golden thimble studded with diamonds.
"Is this your thimble?" the Lord asked. Again, the seamstress replied, "No."
The Lord reached down again and came up with a cheap tin thimble
"Is this your thimble ?" the Lord asked. The seamstress replied, "Yes." The Lord was pleased with the woman's honesty and gave her all three thimbles to keep, and the seamstress went home happy.
Some years later, the seamstress was walking with her husband along the riverbank, and her husband fell into the river and disappeared under the water. When she cried out, the Lord again appeared and asked her, "Why are you crying?" "Oh Lord, my husband has fallen into the river!"
The Lord went down into the water and came up with George Clooney. "Is this your husband?" the Lord asked.
"Yes," cried the seamstress The Lord was furious. "You lied! That is an untruth!" The seamstress replied, "Oh, forgive me, my Lord. It is a misunderstanding. You see, if I had said 'no' to George Clooney, you would have come up with Brad Pitt.
Then if I said 'no' to him, you would have come up with my husband. Had I then said 'yes,' you would have given me all three. Lord, I'm not in the best of health and would not be able to take care of all three husbands, so THAT'S why I said 'yes' to George Clooney.
And so the Lord let her keep him.
The moral of this story is: Whenever a woman lies, it's for a good and honourable reason, and in the best interest of others.

Eleven people were hanging on a rope under a helicopter, ten men and one woman. The rope wasn’t strong enough to carry them all, so they decided that one would have to let go. But they were unable to decide who until the woman made a touching speech. She said she was used to giving up everything for her husband and family and for men in general, to making sacrifices in her life. As soon as she finished her speech, all the men started clapping.